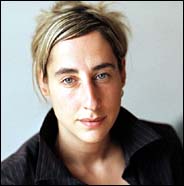 "There has been a very remarkable German revival," this mother of a preschooler said. "The older generation has been more interested in the past, the war, politics. My generation looks at itself."

In the last five years dozens of German writers — mostly 20- and 30-somethings living in and writing about the postwall Berlin — have sprung up like poppies. Most were first received with something approaching euphoria, praised by critics for the fresh power of their personal journeys in the newly reunified Germany.

"We were lauded for getting rid of the burdens of the past and the guilt," Ms. Hermann said. "We disregarded our past, neglected it, and it was seen as a strong, powerful energy." But "the mood now is different toward us," she continued, adding: "The critics are asking, 'How can they be so introspective? Can't they write about anything else?' "