My death-defying contribution to the blog promoting the forthcoming Words Without Borders/Open Letter anthology The Wall in My Head. [Note: Original site no longer exists; link updated 5/13/13. Following is the text in full.]

Martin M. Šimečka, primarily a journalist but known to most English speakers as author of the 1993 Pegasus Prize-winning novel The Year of the Frog, published a biting article last May on the Vienna-based site Eurozine titled "Still not free: Why post-'89 history must go beyond self-diagnosis." He begins:


"Some of you may recall the western hopes in the aftermath of the Velvet Revolution that central Europe could enrich the western political world with fresh new ideas, values or insights that it lacked; that perhaps central Europeans might come up with a vision of a 'third way' between capitalism and socialism. These hopes rested on the assumption that central Europeans' experience of suffering under communism had made us better human beings, more inquisitive, sensitive and intellectual. Today, that hope looks pathetic, and it has become clear that western perceptions of central Europe were truly naive."

Šimečka, a Slovak who lives in the Czech Republic, argues that what at the time looked to many in the West like the fall of communism in Central Europe—a liberating event; the apotheosis of, depending on your background and point of view, Reagan's arms buildup and Star Wars missile defense shield or Gorbachev's glasnost or the grass roots stick-to-itiveness of the citizens on the far side of the Curtain (underestimated in nearly every account I've ever read), who, rather than try to break through the wall of Commie officialdom, simply stopped, turned heel, and walked away from it to form their own civil society—was actually no fall at all but a rise: the rise of globalization cum laissez-faire capitalism.

By 1989, Šimečka writes, Adam Smith's invisible hand had "withered into a crippled stump." In Šimečka's homeland, Czechoslovakia (and its successors, Slovakia and the Czech Republic), the installation of capitalism through the 1990s—which is to say, the privatization of businesses, both large and small—was a frantic rush job, jury-rigged in such a way that it inevitably favored the powers that were, leaving most economic power in the hands of the nomenklatura, the "old structures," as they were colloquially known; or, hard to say for Slovaks and Czechs if this was worse or better, transferring it into the hands of foreigners, including the dreaded and envied Germans.

Meanwhile "the West" (whoever that means these days) had lost its moral mirror. No longer could opinion makers dwelling in democracy hold up the Havels and Michniks and Konráds as long-awaited proof of the kinder, gentler society that would necessarily bloom once intellectuals were finally lent the ear that they deserved.

Yet it is not Western naïveté that Šimečka is concerned with. It is the failure of Czechs and Slovaks and Poles and Hungarians themselves to be free, and to be free where it matters most: in their minds. As Šimečka puts it:


"All of us who lived at least part of our adult lives under communism have been marked by the past to the extent that we may never be able to discuss it in the language of a natural, free world. We may be able to distinguish between the courageous from the cowardly and victims from culprits, but not between those who are free and those who are not. The category of a free human being simply did not exist under the communist regime. Defiance, resistance or attempts to live a parallel life outside the system may have represented signs of longing for freedom but they did not represent freedom itself. This is why we can and we should bear witness and many deserve admiration and respect for their courage. Yet this does not entitle us to claim that we can interpret this part of history in a free and unbiased way. We are all like patients who self-diagnose and prescribe their own treatment."

And Šimečka believes that the first place freedom can happen (for it has not happened yet) will be in the rewriting of this part of Europe's history. It is up to the generations with no experience of communism to interpret the past free of personal anger, bitterness, and resentment, as well as of deserved if at times excessive respect and deference toward the members of the generations who swam in it—who sank or swam in it—from the day they were born. In other words, the first freedom will come from the ones with no Wall in their heads, the ones with their heads free of rubble.

I saw this for myself during the five years I lived in Prague, from 1990 to 1995. During a night of drinking with Czech friends my age or older (that is, born prior to, say, 1965) at some point the conversation would invariably come around to what things used to be like in the bad old days. Not that it necessarily turned into a bitch-and-moan session; sometimes it got heavy; some of them had, after all, done time in prison. But as often as not there were laughs to be had in the reminiscing, a welcome relief from the pressure cooker of keeping up with the neck-snapping pace of life after the explosion of time (as Jáchym Topol referred to it). Whereas spending time with Czech friends who were younger than I was (born, say, 1970 or later), I rarely heard any discussion of the old times, unless it was about TV shows or bad pop music. Not that they were any less informed or intelligent than my older friends; they just weren't nearly as influenced by the past, as weighted down by it, for obvious and understandable reasons.

Of course, unfreedom comes in many guises. Many in "the West," including probably most of the people I know, would say that consumerism, marketing, and advertising are the main threats to a free-thinking mind nowadays. I myself have come to believe that whether or not I'm "free"—by which I mean free to make decisions in my own best interest, unharmful to myself or to others, based in love, not in fear—is less a question of my rights, or my exposure to manipulation by advertisers, or the scaremongering of government propaganda, or the diminishment of public space as corporations assume the functions of government (not to dismiss the significance of these things) than of my willingness to take responsibility for myself.

In other words, maybe for us—at least those of us in the United States, a country with a long and, to put it mildly, checkered tradition of seeking to "bring freedom" to other parts of the world—the 20th anniversary of the fall of the Berlin Wall is a good time for us to ask not how free or unfree are the people of Central Europe but how much freer or unfreer since then have we become? 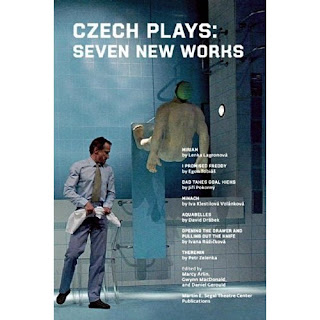 It contains a play by Iva Klestilová Volánková, called Minach, that I originally translated for the Czech Center New York's staged reading series in 2002. (Not to too blatantly hype myself, but you can also buy a copy of Minach separately from the Theatre Institute in Prague.)
Posted by Alex Z. at Tuesday, June 16, 2009